Leek Potato and Pea soup with Chicken and Chilli….and the cure for the common cold

Well it’s been a long time since my last recipe and indeed last random bit of waffle. I hope you’ll be pleased to hear that not only am I back in the recipe writing game but also the random waffle game too. The random waffle consists of a public service announcement about what to do in case of a zombie attack but I’m not quite there on that one yet.

After a month of living in a hostel I’ve found a great place to live in Glebe (in Sydney). While I have been cooking reasonably frequently in the hostel it was almost impossible to set up a tripod in a kitchen the size of your average pantry. I am exaggerating slightly but you try cooking with 10 backpackers around you. All of them for some reason cooking some sort of pasta, value fish finger and tomato sauce thing. Strange but true. You wouldn’t believe how many different ways I’ve seen pasta and value fish fingers cooked.

Anyway I think I could write a lot about the weird and wonderful backpacker ‘recipes’ but I thought I’d instead tell you about my tasty soup I cooked tonight.

So I’m on a massive budget at the moment. A combination of stupid limits to my Australian student visa (don’t get me started) and the hell of job hunting. Anyway. I have to be sensible with my money. Having not been in this position for a while it’s been quite refreshing to try and cook on a budget again. Lots of soups, mince related recipes and stews. It’s also opened my eyes a bit that not everyone can afford to get the good ingredients all the time. It kind of sucks really. You can have the best intentions to buy nice free range meat and good quality vegetables but what can you do if you cant afford to get the nice stuff. I mean all meat should be reared and slaughtered in a humane stress free environment but with the mass produced stuff I just don’t think it is. Supermarkets are getting better and I think in Australia the standards for the beef are pretty high but go to America and you’d be shocked at what happens to the cattle. Check out a documentary called Food inc. and you’ll see what I mean. Anyway I’m having a bit of a rant. I don’t really know what I was trying to get at. Petty much it sucks being broke. I want to buy some massive prawns and cook them with lots of garlic and chilli but I cant. Booooooo!

Ok so back to the soup. I made a chicken soup earlier in the week and it worked really well. Woke up with a nasty cold, made some soup woke up the next day with no cold. Yes, I’ve cured the common cold! I’ll tell you as I go through the recipe how to make that soup as it’s very similar to this one up to a certain point. This is one of those recipes you cook on a weekend when you can just chuck it on and forget about it for 2 hours and then you have lots of soup in the week for lunch or a light dinner.

So this will make a large vat of soup. You’re going to need a nice large deep sauce pan. You can chop the vege quite roughly as we are going to whizz it all up at the end. You will need;

1. Add the onions and carrots to a large deep sauce pan with a good splash of olive oil. Add a pinch of salt and pepper and cook off for about 5 mins until the onions soften. Now add the potatoes and garlic, season and continue to cook off for a few mins. Then add the leeks and celery and another little season of salt and pepper and a teaspoon of dried mixed herbs. Now at this stage I added a knob of butter when I add the leeks. Not really sure why but I like to add a bit of butter when I put the leeks in. A tiny bit of butter aint gonna hurt! Go on, live a little.

2. Ok so once we’ve cooked down the leeks and celery add cold water to about 2 inches from the top of the pan. Bring this to the boil and add the stock cube by crumbling it into the pan. Now add the raw chicken legs to the pan making sure they are all submerged. If they aren’t submerged then add a bit more water. Bring back to a simmer and cook this for at least 2 hours. The longer you can cook this for the better really. You will get more flavour and goodness from the chicken if you cook it for longer. 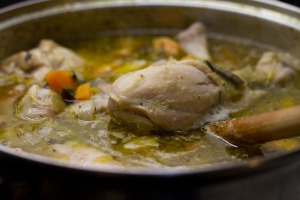 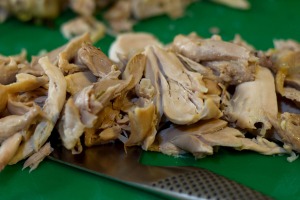 Note for alternative recipe: At this point you can add sweet corn cut from 3 cobs and a head of broccoli cut up into small bits. Bring to the simmer and cook for 6-7 mins then add the stripped chicken. Taste, season if needed and serve. Leave the soup chunky. Also if you are going to cook this recipe then add some fresh ginger finely chopped when you add the stock in stage 2.

4. Back to this recipe…After 4-5 mins the peas should be cooked, add a splash of milk then get the hand blender and blend up the soup until it’s a smooth consistency. Now taste and season with salt, pepper and the chilli flakes. Add the stripped chicken and stir. You can save a bit of the chicken to put on top of the soup when you serve it. Garnish with a sprinkle of the chilli flakes.

For a little extra zing get a large red chilli, a sweet red pepper (capsicum) some fresh mint and finely dice everything (de-seed the chilli so it’s not too hot). Mix up in a bowl and season with sea salt and pepper. Add a sprinkle of this on top of the soup as a garnish. I’ll try this in the week and put it up. Only thought of this as I was eating the soup but I reckon it will be well tasty!……Enjoy!

Well this worked a treat. I’ve been using this banana bread recipe for a while, so I decided to jazz it up a bit. Adding some chocolate really takes it […]
Kit-Kat Banana Bread
%d bloggers like this: