So I feel like this is some sort of confession at an A.A. meeting or something. “Hi my name’s Tim and it’s been 2 months since my last post”.

I realised this the other day when I was on my site showing a friend something and when I checked my last post, to my horror was January 4th! It’s not like I’ve not been eating or anything.  I guess I’ve just busy and maybe cooking not the most exciting food. I think it’s just laziness really, combined with the feeling I should only put exciting things up here. I think it’s better to put things up more frequently, even if they’re not so good or exciting it’s still going to be pretty healthy so I figure I’ll just put the effort in and try to put stuff up a bit more often. However, today though is not healthy in any way what so ever. The only tip for this recipe is don’t hold back on the butter. I use Harmonie organic butter from Denmark. It’s amazing. It’s a bit like lurpack.

It’s a really easy thing to cook. Only a few ingredients and very simple and quick to make. You can have it with all kinds of food. From stews to salads or even as a breakfast accompaniment.

You can make this with either water or milk. It kind of depends what you’re going to have it with. If it’s a rich stew you can make it with water, however if it’s with something like a salad, bacon and eggs or just as a snack I’d  use milk. This is the first time I’ve cooked this based on me trying to keep track of how it was made the other day when I had it so I might have got it totally wrong but it tasted pretty good.

So you will need.

1. Warm the milk in a pan so it’s just heated through a lightly steaming. Let cool to luke warm. Add a pinch of salt and a grind of pepper.

2. In a mixing bowl add the maize meal and the cheese, another pinch of salt and pepper. Mix well then add the milk. Stir with a spoon until it’s all mixed together into a big lump. Now get you hands in there and knead it like dough on a chopping board or if you’re very lucky on your stone bench top. I’m not so lucky so I just dusted a chopping board with a little of the flour and kneaded it on there.

3. Once the mixture is nice and smooth and resembles a bread like dough pull off some in your hand and make into a ball about satsuma size. Repeat so you have 4 balls then pat them down into discs about 1cm or so thick.

4. Get an oiled baking tray and place them on there with a small knob of butter on top of each one. Spread the butter around a bit then add a tiny sprinkle of salt. Pop under a medium/high grill for about 5 mins. Watch very carefully. Once they have gone golden take out and turn them over. Add more butter (I did say this wasn’t the healthiest thing by the way) another sprinkle of salt and pop back under the grill.

5. Now after this side had gone golden I decided in my infinite wisdom to add a little grated parmesan on top and grill for a further 1-2 mins. A good decision.

Serve as a snack with more butter spread on top or add almost anything you like. I was thinking to griddle some zucchini and mushrooms and serve them on top of the bread with a poached egg. Should be good. I’ll try it out and see how it goes!

Sorted! I’m currently cooking up a slow cooked beef stew for later which I’m going to serve a few of these things with. Should be good! 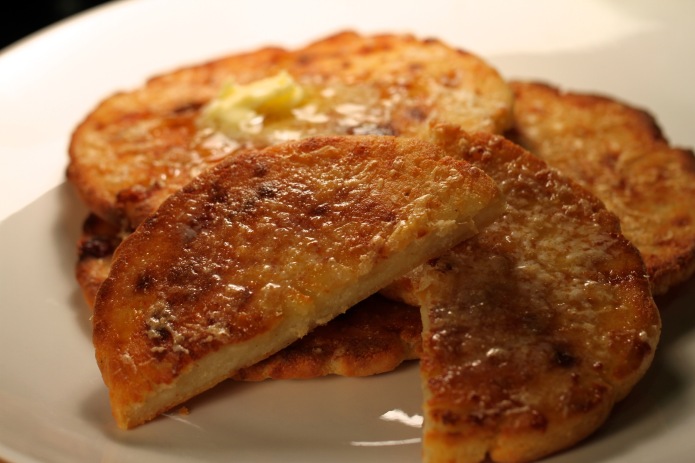