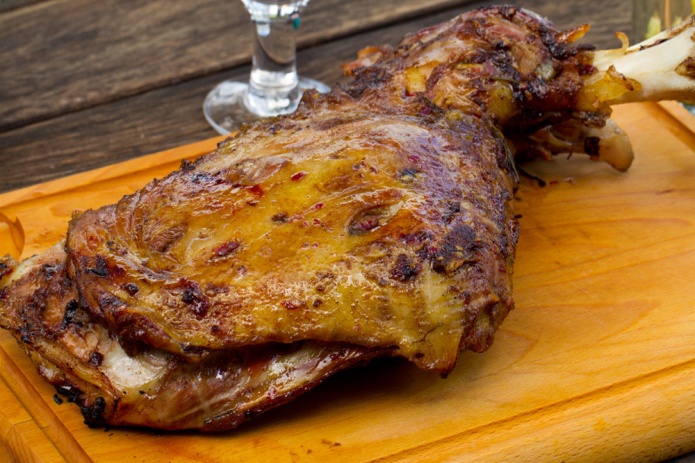 So I’m finding it increasingly hard to keep up the frequent writing. Maybe I’m lacking some inspiration or maybe I’ve just not been doing enough recently to have anything interesting to write about. The writing of the cook book is progressing slowly. I think it might be a slightly bigger project than I thought. It’s not going to be rushed but my initial aim to get it written by Christmas might be tricky. The further I go into it the more I realise there is to think about and do. It’s coming along tho!

So this is essentially about the lamb I cooked the other day which was a slight experiment as I was just using what we had in the spice cupboard but it turned out pretty well so I thought I’d let you have a go and see what you think. It’s great for the bbq but also doable in the oven. However I will first start with a little rant.

I’ve recently be trying to get fit and loose a bit of the early 30’s fat that seems to be very easy to put on and very hard to get rid of. Happily I am wining the battle but it has not been made easy by the supermarkets. I’ve been collaborating with our good friend Mr Will Power. So far it has been a good friendship with only a few minor ‘arguments’. I’ve come up with a good way of avoiding the bad stuff that ruins all the hard work in the gym. The bad stuff I’m talking about are all those salty snacks and sugar laced treats that gets made to look so colourful and tempting in the supermarkets. There seems to be no end of weird and wonderful variations on the humble biscuit and you’d be amazed at the different things you can do with a peanut.

Now, the best way I’ve found to avoid this stuff ending up in your basket as you wander around the supermarket is when you see one of these tasty treats that you really fancy just visualise yourself eating it then that guilty slightly sick feeling you get after for instance eating 2 bags of haribo then you should hopefully not want to buy it. Now, this doesn’t always work but I’d say 60% of the time it works every time. If you can manage to get around a supermarket and avoid buying all that stuff then job well done.

My main issue with the supermarkets it they always put chocolate and cakes right next to the tills so while you’re there waiting in line and you’ve been so good and managed to not get any kit-kats you then have to stand next to all the nice tasty looking chocolate and cakes and then suddenly you think it’s a good idea to buy 10 chocolate mini rolls for the price of 6. Bastards! At least while you’re walking round the supermarket you walk past the sweet isle and are only tempted for about 10 seconds or if you are really sensible you can avoid the sweet isle completely, but while you’re waiting in line at the till they know they have you. And it’s not like they put fruit or carrots there which would be oh so much better to be buying to snack on, no they put cakes chocolate and trashy magazines. I mean it’s not like you’ve ever got in line and suddenly realised you forgotten to buy a big slab of chocolate or the most recent issue of heat magazine. No, it’s things like eggs or flour or something that you really need and is essential to what you are cooking and then as long as you are lucky enough to have someone with you, then having to do the mad dash round the supermarket to find the fucking paprika before it gets to your turn at the till. And for some reason it becomes not only the most stressful thing you could ever do but also impossible to find the things you are after.

Anyway I think it’s just a conspiracy to make people fat and depressed so they eat more crap and get fatter and more depressed. And it’s funny that all this sweet salty crap is generally a damn site cheaper to produce than good quality fresh produce which means they can make more money from it so of course they are going to put it in areas where you are more likely to buy it. Sneaky bastards I hear you cry….yes, yes they are. Check out Food Inc. It’s a really great documentary about where your food really comes from, really makes you think twice about that you are buying.

Anyway enough ranting. I was down with my friends family in Winchester the other day and a few people came over for a BBQ. I went as always to the Beachcroft Farm shop to get the Lamb. We got a few hand made burgers from them as well and a nice shoulder of lamb which managed to feed about 10 people pretty well.

So for the lamb you will need

We served this with some nice salads and some bbq’d mushrooms with blue cheese.

1. OK so get the lamb and stick your knife in it about every inch or so. Get the garlic peel it and slice it lengthways in half then lengthways again into small slices and stick these in the holes you made. Put the lamb in a deep roasting dish. Now get the rosemary and pull it off and put it around the lamb. You want about a handful. Now drizzle some olive oil over the lamb and season with salt and pepper. Sprinkle over a teaspoon of the ground coriander, a teaspoon of paprika and a teaspoon of Ras El Hanout and then add the crushed chillis. I used about a teaspoon here as well but you can use more or less if you like it more or less spicy. Ok so now pour a glass of white wine around the lamb (not on it as it will wash off the spices) Finally cut 2 lemons in half and put around the lamb, face down. Now cover with foil making sure to seal the roasting dish totally and put in an oven on 130°C for 3 hours. I know this seems like a long time but it’s worth it.

2. After three hours remove from the oven and take off the foil. You should have lots of liquid in the pan. Remove a ladle of this liquid into a bowl and add 3 tablespoons of honey and squeeze the lemons that were in the roasting dish into it as well. Be careful when you do this as they will be hot. Give it a mix and there is our glaze for the bbq. With the rest of the liquid put in a bowl and put to one side. Will act as a nice sauce to pour over the lamb when you carve it

3. Now get the bbq on nice and hot. Remove the lamb very carefully from the dish as it will almost be falling apart. Pour over some of the glaze turn over and add more glaze. Keep cooking this for about 10 mins adding more glaze every few mins and turning each time you do that. The outside of the lamb should start to take on some colour. Once it looks to your liking remove from the bbq and put on a chopping board and let it sit for 10 mins while you do your mushrooms and get your salads out. The mushrooms are really simple. Face up on the bbq and crumble blue cheese and season with ppepper then cook for 6-8 mins until the cheese has melted. If you have a bbq with a lid then all the better. Just lid down for 5-6 mins then it should be ready.

4. Sorted. Use the rest of the liquid from the lamb that you put to one side and pour over the lamb after you’ve carved it. Boom! Enjoy. I completely forgot to take any more photos at this point as we all got a bit excited about the lamb.