Well it’s been a pretty productive day. I’ve been to the bank, bought some new shoes, joined a gym, worked out for 2 hours, moved a bed, cooked some watercress soup for lunch and finally helped out with dinner and cooked a ratatouille.

Dinner was great, We had some local sausages from the Larkhall Butchers down the road with potato gratin and ratatouille. Yummy! I’ll get onto that but first the watercress soup. After an exciting morning of banking, shoe buying and gym joinery it was lunch time and rather than go get a sandwich from one of the many amazing sandwich shops in Bath I decided I’d go to the supermarket and cook something for lunch instead. I first decided a risotto would be a good idea but all that butter and cheese might not be such a good idea considering I’d joined the gym not 5 minutes earlier. Walking round the supermarket I decided I’d cook a watercress soup. I grabbed some watercress and an onion, a few carrots and a leek and off home I go. By the way I managed to get all that for £5. Not bad as it will make enough for 3 lunches easily. I will say that the photos didn’t come out too well. I was trying out a new lens kit on hipstamatic, but it seemed to struggle to keep everything in focus. Back to my proper camera. 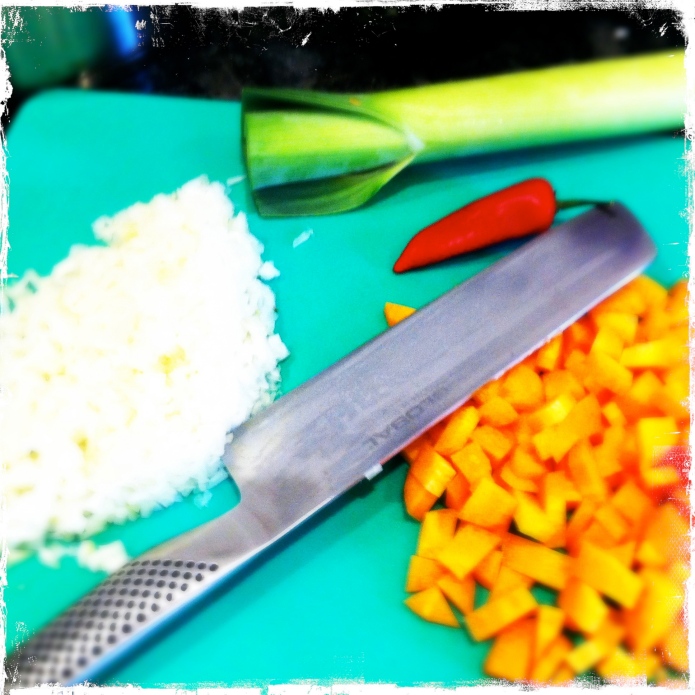 Ok so for this you will need.

2. Now add the chopped watercress and a pinch more salt and a generous pinch of pepper. Let this cook for 2 mins then add the stock and stir well. Let this come to a simmer and give it 3-4 mins.

3. Now add a tablespoon of crème fraîche and stir into the soup. Taste and season with salt and pepper if needed.

4. If you have a hand blender then give it a whizz. If not then it’s just as nice if you leave it with bits.

The whole thing takes about 20 mins. Serve with some crusty bread. Sorted.